skip to main | skip to sidebar

Posted by Anne Panning at 7:52 PM No comments:

It's a cold, dark, rainy December morning. It's winter break for me—a time of wandering through questions I never have time to entertain usually: who am I? what am I doing? I can feel myself gearing up for a writing project that's been with me a long time: a long essay about my mom and dad's house in Minnesota. The metaphorical weight of the house, now that it has been completely gutted, right down to the removal of walls, rooms, stairs and floors, is enormous. The house is a big empty shell, and I need to go in there. Still, the metaphor being so big, it's overwhelming.This is how the house used to look right after both of my parents died. 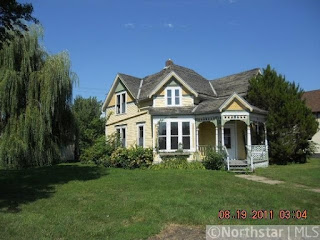 There's one regret I can't shake: that I never tore little pieces of the wallpaper off to save as memories. My mom was big into wallpaper. And quilts. And teapots. And Elvis. And cream of mushroom soup.

The house went into foreclosure after my dad died, and someone bought it. I almost went crazy trying to find out who it was. Apparently, it was a family with five kids, out-of-towners who no one knew.  I obsessed, Googled, tracked them down. I met them one summer when they were gutting the house. They let my sister Amy and me come in and see what they had done. It wasn't as hard as I thought it would be because I harbored hope that at least someone who loved old houses was going to bring it back to its old glory.

The couple divorced and left the house gutted and unfinished.  Here's what it looks like from the outside now. 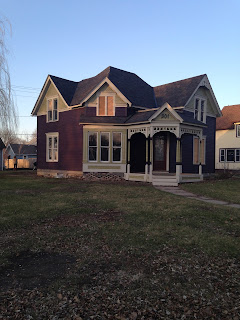 It looks nice, sort of, but it's empty inside. Utterly empty. The couple and their five kids have moved out. No one lives there.

I'm going to live there for a while.

Novel "Research" and Other Legitimate Distractions


I've decided on a title for my novel.  It came to me one night when I couldn't sleep: The Clean Plate Award.  I'd been using All-You-Can-Eat as the working title, but that's already the title of a short story I published, so it felt too recycled and tired.  I hope my new title gets at some of what's going to be at play in the book: a challenge, an admonishment, an obsession, and of course a lot of eating.  Being told you have to clean your plate is often punitive and so I hope that idea will also float around somewhere in the subtext of the book.

One thing I love is how easy it is (and yes, distracting) to do research online.  I spent a good part of yesterday morning trying to figure out if chardonnay should be capitalized or not.  There were so many different opinions and sources, but I eventually went with not capitalizing it.  Then, I started writing about my character, Olive, having done a couple Tough Mudder events, and realized I knew very little about them.  So I posted a question on Facebook and within a few minutes, a friend got back to me and filled me in with the best, most particularized details I could ever hope for.  It was wonderful! Then, I needed names of paint colors for the Victorian house Olive's parents had painted, so it was off to the Benjamin Moore website, where I settled on Summer Glow, Dill Weed, Pottery Red and Bavarian Cream.  You get where I'm going with this.

These are the fun parts of writing a novel. These are the stupid, little but important things that make writing a book take far longer than it should. The harder, less fun parts are just sitting there writing it. I've completed Chapter One, but when I say "completed," I really just mean I've written it. I can't stop fussing with it.  Most of my fussing is additive.  I keep writing notes to myself in the margins. The one that keeps coming up most frequently is: atmospherics.  When I open up most of the novels that I love, there are always lots of atmospherics, which is not just setting but mood, time, light, feel of a place, weather, familiarity and essence.  That's what I keep filling in.  Because my fictional town, Mabel, New York, is an amalgam of about four places I know, I have to keep it very detailed, concrete and specific to make it its very own.

Chapter One is 23 pages.  When I "finished" it, I went to my favorite thrift store as my reward. I spent a luxurious hour in there at least, and left with a sugar bowl and a Japanese sewing basket.

On Beginning a New Novel & Other Impossible Pursuits

I began, in earnest, working on my new novel as soon as I turned in my grades this December, but realized in some ways I'd been writing it in my head for almost a year. I don't normally work that way. I'm a planner; in fact, some of my friends call me Anne Planning for that very reason. For my novel Butter, I had numerous charts, plot outlines, pictorial timelines, and almost complete accountability for everything I was writing before I even wrote it. I'm pretty sure I knew (roughly) how it was going to end before I started it.  But this novel project feels different than anything I've worked on before.  Here's why:

1.  I got the idea while teaching a food writing class over a year ago.  I assigned a wide range of essays and articles, one of which was called, "The Long-Form Burrito Champion of the World," by Tom Burke (Tin House, Spring 2009).  It was about the strange and inexplicable world of competitive eaters, and for the life of me, I couldn't stop thinking about it long after I'd read it.  I began researching anything I could get my hands on about the topic. I watched hours and hours of youtube footage of both professional and amateur eating contests.  The question that kept rolling through my head was: why?  Why would someone go to such extreme measures, sometimes to the point of vomiting, and in the case of a woman in Japan, choking to death at a dumpling eating contest? What could be the psychological impetus for such a thing? What would drive someone to take up such an odd and grotesque "hobby"?

Lesson: when you truly cannot stop thinking about something and it begins to take over your life, it's probably a good idea to write about it.

2.  I spent almost the past five years working on a memoir about, among other things, my mother's life and her untimely death, and then, before I could even finish that draft, my father's death (who, in my opinion, completely went off the deep end, due to grief).  It was, of course, a rigorous, emotionally draining and creatively challenging process to write such a book.  I gave up on it at least two or three times.  It started out as a 385 page bloated emotional tome heavy on feelings; with the help of generous readers, I eventually wittled it down to a slim 250 pages and eliminated almost all "emotion" words from the book.  But working on that book did something to me as a writer.  I hadn't realized before taking this on how difficult it would be to write a memoir worthy of other readers.  For years I'd been harping on my creative writing students about how they had to find the balance between public/private, vulnerability/authenticity, scene/narration, and there I was, knee-deep in the struggle myself. The memoir's subject matter was so intense I felt the book had a choke hold on me, and though I finally feel as if I've come out the other side, it wiped me out, artistically, like nothing ever has.

Lesson:  after writing such a book, I needed to get back to fiction.  I wanted to inhabit a character who wasn't me, and so I now have Olive DeWitt, a 30-year old elementary PE teacher who falls into competitive eating for reasons I will keep on hold for now.  I find myself excited to create this person and the world she inhabits, and have been doing research that has involved driving around western New York, attending (and yes, participating in) local food eating contests, taking a sauerkraut making class, eating lunch at the Byron Hotel, and peering through the windows of Hickory Ridge Party House on a cold winter's day to see what kind of weddings they might put on.

Because I'll be on sabbatical leave this next semester, I'm lucky enough to be able to focus almost 100% on writing this novel.  It's my plan to write a blog post every week just to keep myself honest, focused and on track.  Thanks for reading.
Posted by Anne Panning at 5:22 AM 3 comments:

This morning I watched CNN for two solid hours sitting on the floor of my living room wearing my pajamas.  The kids had gone off to school so I was finally able to catch up on stories and images I would never want them to see.

1.  How we have become "veterans" of national tragedy via terrorism.  This is not about being jaded or desensitized, but rather the way a deep, rugged strength solidifies inside us, the kind I imagine it would take to run 26.2 miles. The kind of strength it takes to bury someone you love.

2.  That this was another piece of our collective national history that my mother, now dead for five years, would not be part of.

I'm not sure how to bridge this dichotomy between the personal and the public; I'm not sure I have to, but I do know this:  as soon as I heard the news about the Boston Marathon yesterday, I wanted to call my mother for no other reason than to say, "Can you believe how awful this is?!  And that sweet little boy?" and for my mother to then say, "What's wrong with people? What is wrong with people anyway?" and for us to commiserate and be sad together on the phone and to feel her love for me, like no other love, radiating through distance and time and for her to then ask about the kids, and for me to tell her that Hudson is having three friends over for his birthday this year and grilling gourmet sliders (she would laugh affectionately at this) and how Lily just got some purple jeans and thinks she's pretty cool wearing them, and on and on we'd go, ending back at a point of sadness neither one of us could ever understand.

I keep waiting for it to rain. I had planned to go running today, but now I want to run in heavy rain. I'm not going to wear my glasses even though the whole world will skew blurry without them. Clarity, today, is enigmatic, elusive. 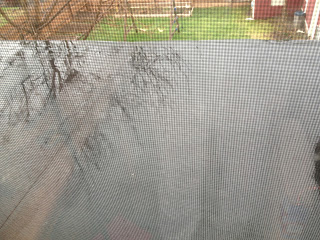 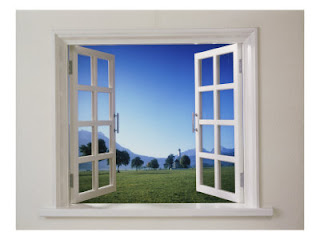